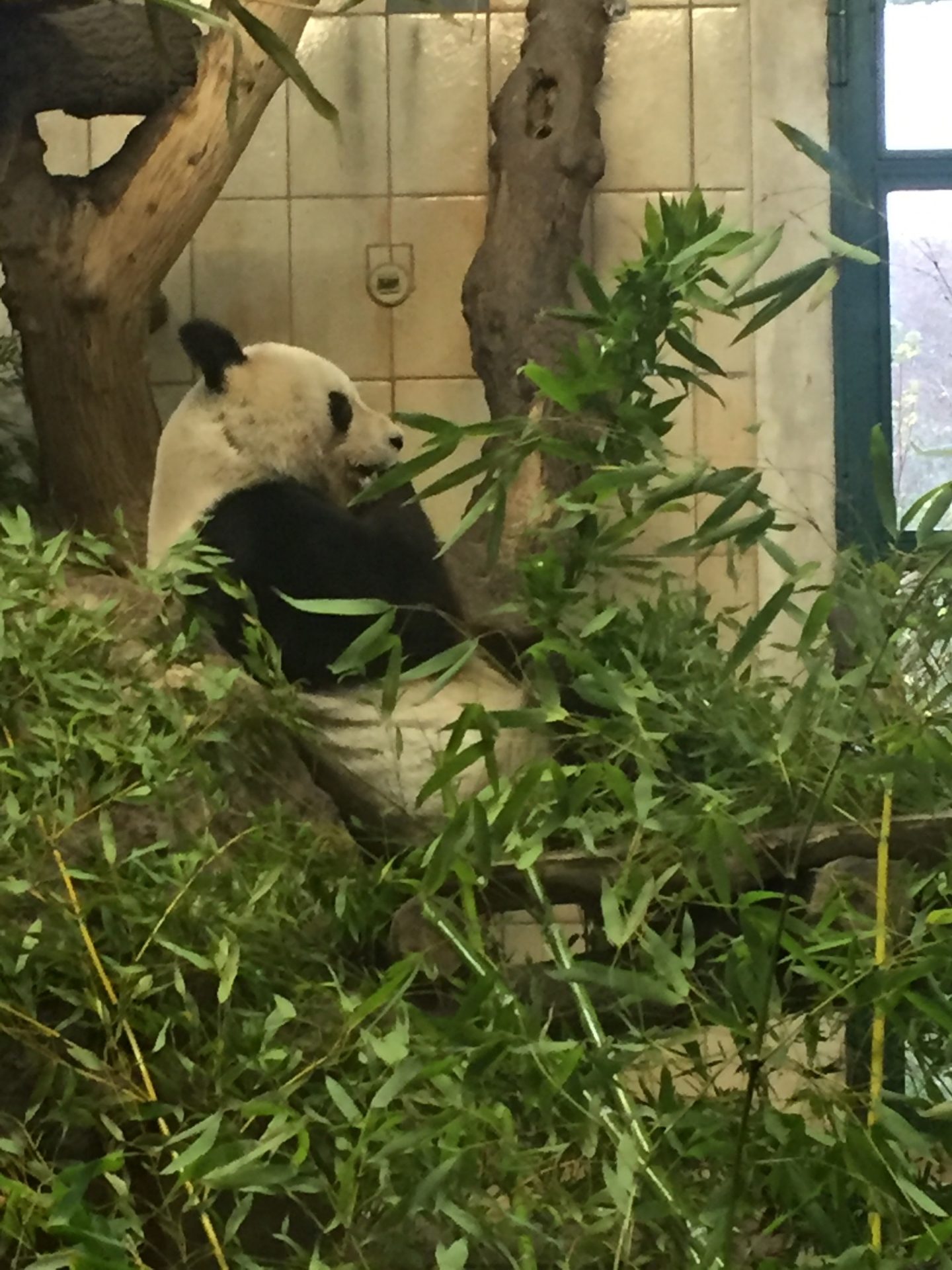 Day 2 in Vienna we woke up to a clear, but freezing day. Was grateful that there was no drizzle so off we went to the Moet Bar & Restaurant in the hotel after a lovely long lie in and had some breakfast.

All I had on the brain was coffee so I ordered a cappuccino and I like to think that there is a foamy heart in the cup. Let’s just pretend there is.

I wanted a savoury breakfast so went for poached eggs on brown artisan bread. This was so good and yolk-tastic too. I cut into it and the yolk just oozed out beautifully.

Amit went for omelettes and he said these were really good. Unusually, his breakfast was accompanied with a dollop of red pesto on the side which I stole as it went really well with my breakfast too.

Breakfast was so good and after a satisfying meal, we ventured out to find the stop for the Hop on Hop off bus tour. We had done our maths to compare the costs of going to the sites individually or with this tour service and it worked out cheaper at 69 Euros each for a 2 day pass which included entrance to the main places we wanted to visit. So off we went!

Our first stop was Schonbrunn palace and gardens. It is a former imperial residence and has an amazing 1,441 rooms and is a Baroque Palace. We weren’t allowed to take photos inside but we did take loads of the areas outside as they were magnificent.

Here is us in front of the palace. It is MASSIVE. It had a lovely Christmas Market festive area in the entrance area with wooden stalls selling food, drinks, gifts and other bits and bobs.

The food blogger in me got attracted to these “props” which to a normal person is dinnerware. Just loved the colours an the designs on them. Amit wasn’t falling for my “I need this” so I left without a bowl or a plate. Boo.

They also had lovely Christmas decorations like these colourful baubles.

These looked so magical and pretty and loved their intricate details.

I am loving the food in Vienna and I believe this is an unsung food trend. Doughnuts and pretzels? These sound absolutely amazing!

After staring at and salivating at all the amazing food, we took a walk through the grounds towards to the Zoo. Just look at these beautiful scenic gardens!

They even had massive ponds with ducks. I was surprised with the crazy temperatures the water hadn’t frozen yet.

We finally made it to the Zoo after walking around mesmerized with the grounds of the palace and this is when my excitement kicked in. I love animal and so was super excited to see Giant Pandas for the first time. I also saw Koala bears but didn’t manage to get a clear picture to share with you.

Pictured below is a super cute polar bear. He was really hungry as the polar bear in the neighbouring part had just been fed and so he was going a little crazy. I guess he felt left out and impatient. It didn’t stop me taking a selfie with him.

Then I saw these birds. Not sure what the one in the middle is but he/she had a really cool look don’t you think?

We also saw this super inquisitive black bear which I know my work mates will appreciate because of an inside joke. It was so cute but apparently quite dangerous.

Now this dude was seriously hilarious as he climbed out of the water and straight on to the weighing scale. Now he was huge and he looked like he stared at his own weight, made a huge sigh and dived back in the water. One can only presume he thought he should lose a few pounds.

Now the panda, the highlight of our trip to the Zoo. Here is a selfie with one of them.

Literally all the two of them did was eat leaves in opposite parts of a room. A tad bit anti-social with each other but nevertheless super cute. I want a panda bear!

After lots of waking we had built up an appetite plus it was super cold. We tried Langos, which is actually a Hungarian specialty and which is a deep fried flat bread. This tasted so good as it was smothered with garlic.

After devouring a langos each we carried on visiting all the animals in the zoo. I was calling out to the Cheetah and it looked at me. They are harmless. Well I believe they are as when I saw them on safari they jumped on the car an were purring away.

Next up was this noisy lot. Pink flamingos who reminded me of home too. They were really loud not sure what was going on but they sounded like they were having a massive argument. Pretty birds nevertheless.

We saw this gorgeous gorgeous tiger but it was sound asleep. It looks so peaceful doesn’t it?

I had to share this video of the panda.

We saw lots more animals but I am not going to bore you with more stories about them. After leaving the zoo, and purchasing a 3 Euro mood ring which has brought great fun, we stumbled across a Lindt shop. Mostly because we went the wrong way. Sometimes it is good to get a little lost!

We filled a pick and mix bag with lots of different Lindt varieties that we haven’t seen in London. We ended up with 600 grams of chocolate. Better eat half (we are so eating our way through it all as per picture below).

Once we eventually found our way back to the bus stop, we chilled for a bit and then headed out to find a nice place for dinner. This was so pretty I had to take a photo.

We decided on Primi, which is a trendy, up market restaurant and bar with lovely interiors and a fantastic menu, which looks like a magazine.

No prizes for guessing that I ordered a Mojito. It was really refresing and so good.

For starters we ordered pizza sticks which had garlic, olive oil and rosemary. They were delicious and got eaten very fast.

I ordered a risotto with Gorgonzola cheese which was beautiful and perfectly cooked.

Amit went for chicken steak with green peppercorn sauce which was pretty spectacular. He had it with a side of mashed potato. The chicken had a soy and teriyaki glaze and the skin was crispy.

We also ordered grilled tiger prawns which were nice but I have had nicer prawns before.

It was a lovely day and I was glad I could tick of seeing Giant Pandas off my bucket list, surprisingly in Europe.

Tomorrow is another busy day sight seeing. Hope you enjoyed reading about my day xx

You may also enjoy:

Hi, I’m Binny - a writer, dreamer, serial wanderluster and travel addict. I am originally from Kenya but now live in London.

I set up this blog to share my experiences eating out, cooking, as well as travelling, both in the UK and globally.

It's my goal to get swept off my feet as often as possible.